On December 20th we were due to fly from Ushuaia to El Calafate in southwestern Patagonia early afternoon. Before we went to the airport, we first worked in an internet cafe, because it was raining a lot again. Once we arrived at the airport, it turned out that we had a four-hour delay. Despite the airport being close to the city, it made little sense to go back, given the weather, and we take the opportunity to do some more work, make reports and pick photos.

El Calafate
When we finally got to El Calafate it was late, it turned out to be too late to orientate ourselves on excursions in the area, transport to our next destinations Torres del Paine in Chile and Bariloche. So we had to postpone that until the next day, which means we will spend the whole day in town. El Calafate is the superlative of a tourist place. Everything is 100% designed for tourism, all because of the presence of beautiful glaciers about 80 kilometers west of the city in the Los Glaciares National Park. The glaciers are all labeled with superlatives:

– the highest: Glacier Spegazzini, protrudes about 100 meters (one block in Argentina) above the water and under water it is still about 200 meters deep
– the largest: Glacier Upsala, a lot of kilometers long and wide
– the most accessible and (it is said here) the only one in the world that is still growing: Glacier Perito Moreno 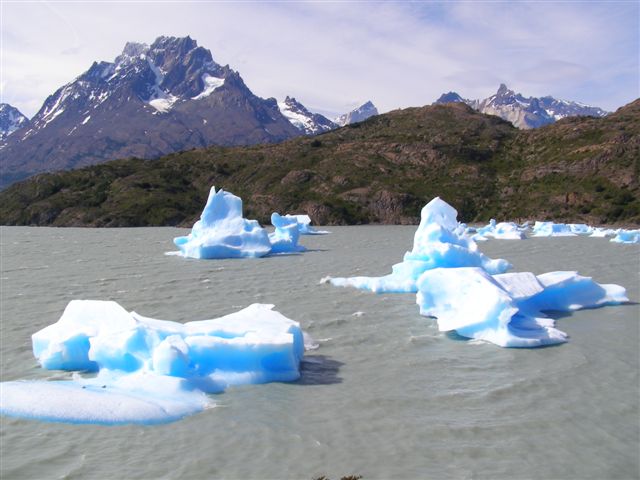 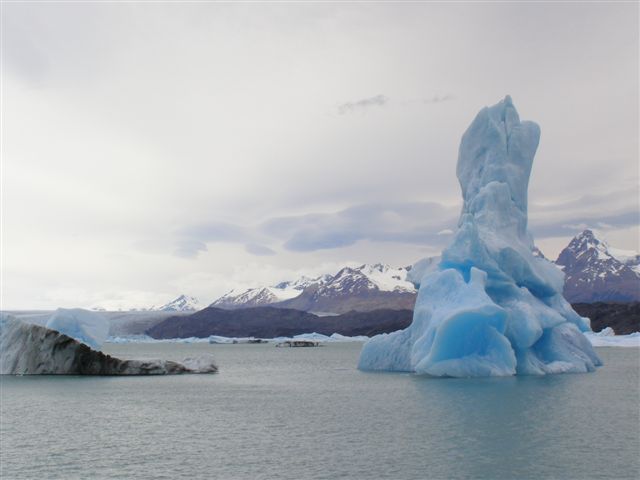 The whole of El Calafate is designed to transport tourists to this spectacle by vans, boats, 4x4s and walking irons, at outrageously high prices for Argentinian standards. Prices of accommodation, clothing, outdoor gear, food or really just everything are exorbitantly high and the service provided is often poor. Things are going way, way too well with Calafate. In any case, the descendants of the gold miners of yesteryear have found their gold and have ensured that “Precios Patagonicos” has become a household name.

boat trip to Spegazzini and Upsala
We choose to first take a boat trip to Spegazzini and Upsala, including a walk to Lago Onelli, a small shallow lake in which crumbled ice floes come to a dead end, forming an “ice floe graveyard”. At least they got that name from the Argentines. For this tour we have to get up early the next morning, which we are not used to. We let restless tour guides mash us with many others in a van, sleep a little further and are shocked when we wake up an hour later on a super luxurious catamaran, including business class and flat screens everywhere with images of crumbling glaciers and photos of the approximately 200 fellow passengers. That is promising!
And indeed the boat trip is very spectacular. Along beautiful mountains, over turquoise colored lakes, past beautiful icebergs to phenomenal glaciers. Please note photos are only photos. This part of Argentina is definitely a “must see”. For that you take those Disneyland-like scenes for granted. An additional advantage of this form of controlled mass tourism, where the charm is of course completely lacking, is that the masses do not get a chance to go their own way and to crush or pollute the beautiful nature everywhere with the (un) necessary waste.

By car to Chile
The next morning we set out to pick up a rental car. All flights to Bariloche were sold out for the next month and two days of buses on very bumpy roads is not a good prospect either. So we chose to rent a car for a little longer than just in Bariloche and to drive this car to Torres del Paine (pronounced: Paai-ne). As with the reservation of the car, we have to wait another hour for the only employee of Budget rent a car in Calafate. Normally you wouldn’t even do that, but the amount of available rental cars at normal rates is also limited, so we don’t have much choice. The road to Torres del Paine takes a few hundred kilometers through fairly monotonous desert-like landscape, where only the rocks that protrude high above the plain in the Torres del Paine park are really worthwhile. We first spend the night in the border town of Cerro Castillo in Chile.

Las Torres
The next day we drive there to Refugio / Camping Las Torres on the right side of the so-called “W”. You can make an 8-10 day camping trek around the central mountains of Torres del Paine. You can also only do the south side of this trek. This roughly has the shape of the letter “W”, after which the trek is named. However, we want to combine walking with driving through the park, so that we can view a larger part of the park. At the Refugio (kind of lodge, camp shop and restaurant in one) we inquire about sleeping options. They are still there, but one bed in an 8 person dorm will cost an outrageous USD 40 around this Christmas season !!!. For comparison, in the north of Argentina you can get excellent and spacious 2-person hotel rooms for approximately USD 15 to 20, – and trekking in Nepal, for example, costs you maybe USD 15 to 20 per day with 2 people, including overnight accommodation and all food. We decide to rent a tent, which is not only much cheaper, but camping in such an environment seems a much better prospect to us than lying with eight in a musty room.
After we have set up our tent, we leave for a day trekking to Mirador Las Torres, a viewpoint at the foot of the Torres del Paine and the right leg of the “W”. The first 3 hours are very easy, the last part suddenly goes up fairly steeply over a wall of partly loose boulders. It is very busy on the “trail” and we regularly have to pull over to allow large groups to pass that are already on their way back. Once at the top we have a beautiful view of the Torres, the glacier and the emerald-colored lake at the foot of the mountain.

A nice walk, but given the enormous crowds and the fact that the morning boat that should take us to the start of the day’s trekking of the middle leg of the “W” is not sailing on Christmas Day, we decide to tour by car the next day and some short walks.
That turns out to be a great choice. In other parts of the park it is much quieter and the wide view over the lakes and the mountains appeals to us much more than a close-up from the foot. We walk along a lake (Lago Gray) full of giant ice floes and with a view of the Gray glacier.
In the evening, enjoy a delicious Christmas dinner at camping Pehoé with a beautiful view of the Torres, see photos.

The next day we will do this tour again, take a few nice walks and enjoy lunch and the view at Hosteria Pehoé, where rooms with “lake view” cost about USD 200, – but at an absolute prime location.

back to Calafate
After lunch we will start the return trip to Calafate, where we will go to the Perito Moreno glacier the next day. In the border town of Cerro Castillo they also know well what Patagonian prices are. We cannot exchange all our Chilean pesos for Argentinian pesos so buy some more in the shop with prices that are way too high. When we go to checkout, it appears that the scan cash register has a problem. The prices he charges are about 40% to 50% lower than the prices on the price stickers. The man behind the till has to laugh heartily and says: “It doesn’t matter, dude, that is only to your advantage”. So we only make a round through the store to use up the other half of the remaining pesos.

When renting a car in Argentina you are invariably told that your deductible is twice as high for damage caused by the car rolling over. In the beginning you think that will never happen, but the next morning on the way to the Perito Moreno we get to see a demonstration of how this can work. When we are close to the glacier, a Peugeot 206 swings violently in a bend and descends downhill towards us. We stop at a safe distance and watch how the driver struggles to keep the car on the gravel road, despite the relatively low speed, and barely comes to a stop on the edge of a precipice. For the statisticians, we just mention that there was a woman behind the wheel, who immediately had to make way for her male co-driver. If the car had gone a little faster, it probably wouldn’t have fizzled out. So we understand how rollover works and take our measures: Susanne is no longer allowed to drive on gravel roads 😉.

Perito Moreno glacier
The Perito Moreno is the main attraction of the region and that is not without reason. The glacier is not the highest (“only” about 60 meters above the water) and not the largest (“only” about 150 km2), but the fact that from land you have a very good view of the front line of the ice mass, makes it very impressive. We continue to watch the slowly moving ice for a few hours and above all listen. Every day the glacier in the middle moves about 2 meters and many pieces crumble off. Mostly silently, the masses of tourists watch and every breath, creak, or support from the glaciers is answered with masses of cameras targeting where the sound came from, hoping to capture spectacular pictures of towering blocks crashing into the river. For that you really need luck and / or a lot of patience, because sometimes hardly anything happens for a few hours, then one after the other falls down. In addition to many small chunks, we see chunks of ice the size of the apartment complex in which we live fall down a handful of times. This is accompanied by a huge roar followed by minutes of hissing from the chunks of ice being tossed up and down in the river by the huge waves. Once a gigantic chunk breaks off underwater, causing an enormous turquoise ice mass to suddenly rise from the water.

Due to the melting of large parts of ice, the center of gravity of the large ice floes that float in the river occasionally changes, causing them to suddenly turn completely upside down and the beautiful blue bottom suddenly to lie above.

We already think this is wonderful, but this is again child’s play compared to the ultimate spectacle that occurred roughly once every five years in the past century. Then the Perito Moreno grows against the peninsula and the river is blocked, causing the water level to rise considerably. Then the river forms a tunnel through the glacier, which collapses again after 1 or 2 days with a huge thunder. The so-called Ruptura. Most visitors, however, have to make do with less and / or the DVD of such a Ruptura.

It takes some effort for us to leave, as an enormous mass of ice has been on the verge of breaking down for hours. Just before we finally turn our backs on the glacier, the time has finally come and from a distance we see another spectacular large mass thunder down. A nice end to an impressive afternoon.