Tilicho up close
The next morning we will first make up for the damage from the previous day. The 3 of us take a walk to the almost completely frozen lake. It is beautifully situated at the foot of the Tilicho massif. Due to the rising temperatures and the forces of the water and the glaciers, the ice has turned into a large mass of ice floes that lie against each other.

Climbing to Mesokantu La
After taking a good look at the lake, we start the tour at 10:00 am towards Mesokantu La pass from where we can descend to the airport in Jomsom. The route goes up directly from the camping site. The “trails” are steep and full of gravel, so that you have hardly any grip now and then and your feet slide down again. We soon find ourselves at an altitude of approximately 5,300 meters, which is clearly visible in the lungs, stomach / intestines, head and legs. However, it is not a matter of just up and then straight back down again (as for example on the nearby Thorung La pass, now called “peanuts” by Santosh and Sangeeta), but we still have to walk for hours at an altitude between 5,200 and 5,300 meters and water is again a problem. Sangeeta is reasonably fit and since there are no steep precipices for the most part, she moves quickly. Santosh suffers from a lack of oxygen and his stomach, I myself have a bad headache and my legs feel like they are made of pudding. They cannot be anticipated. There seems to be no end to the journey across the muddy plateau, covered with snow and tricky stones.

When we get close to the Mesokantu La, we suddenly see a very steep hill, full of gravel and a very narrow (barely 1.5 feet wide) “path”. Sangeeta and I don’t like it anymore. Sangeeta is terrified on such slopes. I don’t see it anymore to have to climb up such a narrow “path”, my head and legs really don’t want to anymore. Meanwhile, it starts to snow lightly and the alternative of going back is much worse and longer than continuing, so little choice.
Before we can start this climb, however, we first have to descend to a small ice-covered river. This descent is over a super steep slope full of mud, gravel, ice and snow. Both porters make big slides and I myself slide several meters down through the mud and snow. Fortunately, the hill turns out to be a bit less difficult from close up than from a distance, but it is still quite a tough walk and I have to stop every 10 meters to relax my head and legs. 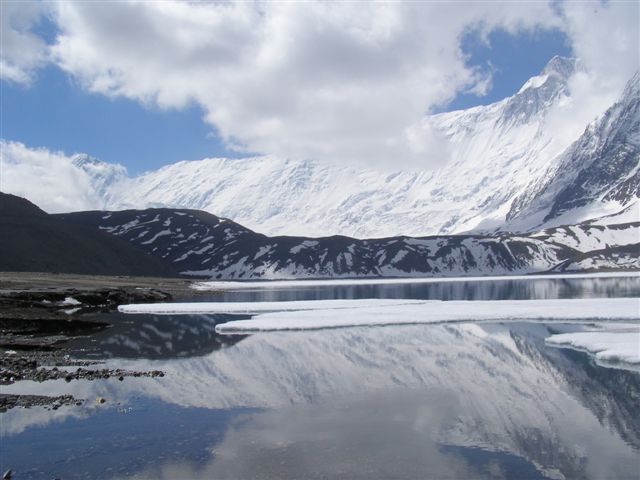 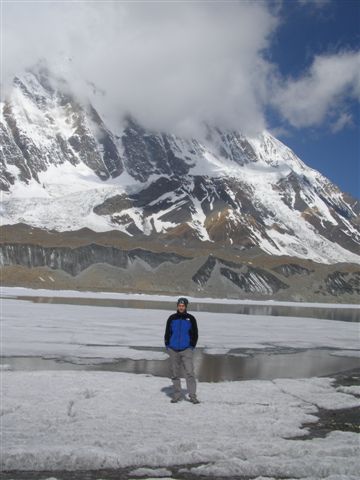 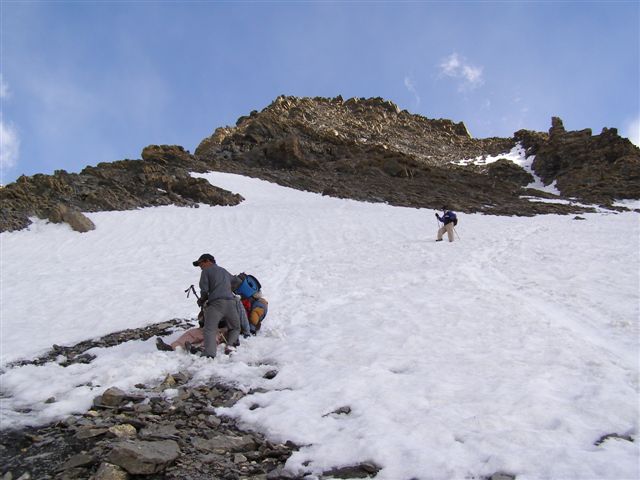 Descend
Santosh and I would love to go downstairs and start right away. There is actually no path. It’s just a matter of letting yourself slide down the gravel, mud and snow. In no time we are 100 meters lower and this combined with the fact that we no longer have to climb, immediately bring our head and legs back into a jubilant mood. However, the route is very difficult at the beginning. Small (and large) stones roll down under our feet and we have to keep a good distance to avoid hitting each other with the stones we move while walking. From time to time, large stones roll down several hundred meters.
Sangeeta is terrified and must be helped down by the guide who also carries 2 heavy bags. She finds the deep snow completely scary. For others, this is where the fun starts. There are huge patches of snow, ending on not so steep patches of rocky land. I quickly “ski” down on my boots, a porter, guide and Santosh follow on their ass. That went very quickly. However, Sangeeta finds it scary and is helped down step by step by a porter. After this welcome change, we still have to descend for some time over a landscape with treacherous stones (fine ankle-breakers).

Water is again a problem, we are very thirsty. When we are about an hour from the camping site, we encounter two camping Yarchagumba pickers. We take a break at their place around 6.30 pm to drink water and tea, have something to eat and to catch our breath. It starts to snow again. When we set off again half an hour later and cross the small hill behind this camp, we suddenly find ourselves in dense fog. The place of our camp (where the porters must be by now) is nowhere to be seen. The guide walks to the left with conviction, while Santosh, Sangeeta and I are all completely convinced that we have to go to the right (which turns out to be correct afterwards).
Fortunately the guide is not stubborn this time, he walks back to ask the local Yarchagumba pickers for help. However, when he finally returns, it is already dark and it is snowing pretty hard. These two men start walking with conviction, straight through the stinging bushes, there is absolutely no question of a path. We follow, luckily almost all of us have headlights / flashlights. The route is difficult, slippery and the stinging bushes are not very pleasant. However, because of the Yarchagumba harvest, there are several camps and the men clearly do not understand exactly which camp we meant. As the crow flies, it really can’t be far anymore and sound carries far into the mountains, so Santosh makes a roar and shouts the name of one of the porters: “DAMBAR !! DAMBAR !! ”. Minutes and minutes. There are reactions from various places, but none of them are convincing of Dambar. Santosh keeps shouting: “DAAAAAAAMBAAAAAAR !! “DAAAAAAAMBAAAAAAR !!” and finally there are light signals coming from the direction where we suspect the camp, but between us and the camp is another valley with a river. Fortunately, the 2 Yarchagumba pickers now also know where to go and where to cross this river. Meanwhile, Dambar on the other side is starting to meet us. On the way Santosh falls twice, where he once bumps into a stone with his already not completely fit knee. He stumbles on with pain and effort.
When we finally meet Dambar, we start the last part and around 9:00 PM we finally arrive completely exhausted in our camp where only the kitchen tent has already been set up. We first have to set up the other tents before we can rest. Santosh feels sick, coughs a lot and has serious stomach and knee problems. I myself am so exhausted that I immediately crawled into my sleeping bag and only sat up for 10 minutes before dinner and had the most night’s sleep of the entire trek.

Last leg
When we get up on time the next morning, the entire area up to about our camp is covered with a thin white layer, which quickly rises when the sun rises. The camp is beautifully situated, completely surrounded by white mountains.
Later we read that in Dolpo, 100 kilometers to the west, snowed so heavily that dozens of Yarchagumba pickers have died and many hundreds have gone missing. On Thursday (4 days later) most of them are still not found.
The last day is a breeze: walk for another 5 hours, just down the valley of the Lungpughyum Khola (= river). A beautiful valley with beautiful eroded landscape, lots of greenery and the white peaks in the background.
When Marpha, Jomsom and nearby Thini come into view, we feel happy. The trek was very beautiful, fun, challenging and above all enough. Neither of us would want to walk one more day.
Jomsom has changed a lot compared to 3 years ago. Suddenly there are many motorcycles, a few cars and some tractors. A strange sensation in the previously so peaceful mountain village. There is now a reasonably passable road between Muktinath and Ghasa and the locals (understandably) like it so much not to have to walk all the time.

We move into the Hotel Majesty, an accommodation where Santosh and Sangeeta are almost like children. Here we can again enjoy a good shower and delicious food. After dinner we have a few more glasses of raksi and have a chat with a philosophical Thai student. Some of his comments are poignant & interesting, others make us roar with laughter. A nice end to this day. We go to bed on time, because the next morning we have to be at the airport at 6 am.

Flight to Pokhara
Due to a Maoists’ bandha in Kathmandu the day before, the plane is delayed by an hour, but at 7.30 am we choose the airspace. We have already made this flight in the opposite direction, but again I sit with my nose glued to the window for the entire 20 minutes: the view of the hills, forests, villages, rivers and white mountains is enchanting. Sangeeta and I joke that we will never go trekking again, from now on we will just fly. Very easy and beautiful. 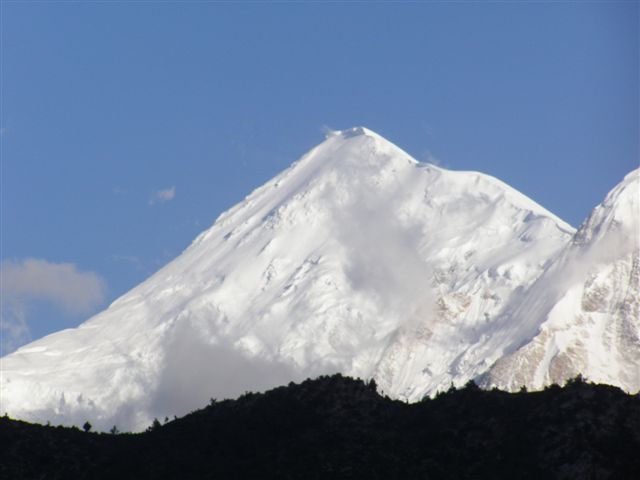 Pokhara Lakeside and drive to Kathmandu
In Pokhara Santosh takes a free flight back to Kathmandu with his frequent flyer points, Sangeeta first goes to her brother and I visit a friend who has his own guesthouse. He has just a little time before he goes back to school (he is also a teacher). This is open again for the first time after an 11-day strike (due to the ……. Maoists).
He can also arrange a taxi to Kathmandu for a nice price. Still a lot of money, but more comfortable, faster and safer than the micro. I decide I deserve that after such an adventure. After all, the price for a ride of more than 200 kilometers is even lower than that of a ride from Schiphol Airport to Amsterdam Center.
But first I pay a visit to Lake Side. In the Boomerang restaurant I enjoy a mango lassi, cappuccino and the view of the lake. Lakeside looks much better and more relaxed than a few weeks ago, with many, many fewer tourists and beautiful weather with mountain views.

The taxi takes us to Kathmandu in a 4-hour drive. The ride is quite comfortable, but for this low price we have to accept that now and then huge cockroaches walk over our heads or between our feet. After a relaxed lunch at the Riverside Resort and a few more hours of chugging through beautiful surroundings, we arrive in Kathmandu at the end of the afternoon, where we first drop Sangeeta at home. I immediately drive to Chhetrapati because the driver still wants to go back to Pokhara.

When I arrive at the guesthouse I feel somewhat disoriented. The difference with the past 12 days is very big. First a bath, the end of a wonderful adventure.